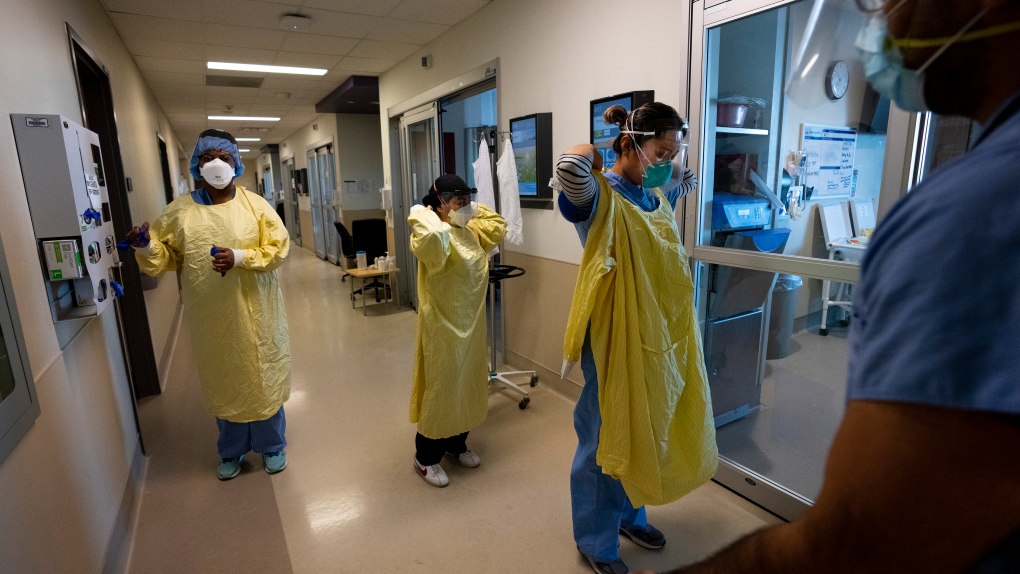 Patti Champoux, an X-ray technologist at Niagara Health’s general hospital in Niagara Falls, Ont., says the facility has been operating at full capacity since the start of the COVID-19 pandemic. But over the past few weeks, health workers on the ground have seen a sharp increase in the number of patients with respiratory illnesses, she said.

Not only that, but the patients who visit her for X-rays look sicker than they usually are this time of year, Champoux said.

“People I’ve seen in the last three weeks are incredibly sick,” Champoux told CTVNews.ca in a phone interview Thursday. “They’re in the ER and they’re white as a sheet, lethargic [and] feverish … They are weaker than I have seen in a long time.”

This increase is leaving hospitals and health clinics across the country overwhelmed by patients, experts say. Pediatric hospitals in particular have been hit hard. In British Columbia and Alberta, the increase in sick children has resulted in deferred operations and hospital waiting times of up to 17 hours. Ontario’s pediatric intensive care units are too operating far above capacitywith some hospitals opening of additional intensive care units to handle the demand.

The largest children’s hospital in Atlantic Canada is also watching “historical levels” of sick children, said Dr. Andrew Lynk, chief of pediatrics at IWK Health Center in Nova Scotia. At a Nov. 17 press conference, Lynk said the hospital has recently seen as many as 200 sick children in a 24-hour period.

While Niagara Health’s general hospital does not exclusively care for pediatric patients, it has seen a significant increase in the number of children visiting its emergency room, Champoux said, especially those with RSV and pneumonia.

“There’s been a 40 percent increase in kids that I’ve seen in the emergency room,” Champoux said.

“[Some] part-timers work 90 or 95 hours in two weeks,” she said. “They get tired, and then they get sick, and now all of a sudden their shift has to be filled. Then it circles back to people working overtime.

According to a survey conducted by Statistics Canada in 2021, 95 percent of health care workers said their jobs were affected by the COVID-19 pandemic. These impacts included an increased workload and a more stressed feeling at work. In addition, data from the Canadian Institute for Health Information (CIHI) shows that healthcare workers have been working more overtime hours in 2021 than they had in a decade.

Stress from work also has an impact on her home life, Champoux said. The exhaustion makes her too tired to spend time with her husband and 19-year-old son.

“Sometimes I come home and I cry,” she said. “Once in a while I have to push an inpatient to the next day because there’s just not enough time in the day to do their X-rays and … I feel guilty because I think I’ve delayed their treatment.

“It is with a heavy heart that we cannot get to everyone all the time.”

The shortage of health workers at the hospital affects the number of patients that can be treated, Dong said. The emergency department he works in has about 35 to 40 beds. On most days, at least 20 percent of those beds are closed due to staff shortages, he said.

“We’re short of nurses and it’s unsafe to have one nurse in charge of so many beds at the same time,” he told CTVNews.ca in a phone interview Thursday. “From a patient safety standpoint, we have to close these beds because we can’t staff them safely.”

This is contributing to longer-than-ever wait times that are routinely in the double digits for non-emergent care, Dong said.

According to a press release dated November 9, waiting times for non-emergent care at the London Health Sciences Centre expected to exceed 20 hours. Some patients are also seen by doctors in hallways because of the limited availability of beds, Dong said.

There has been understaffing prevalent in hospitals across Canada since before the COVID-19 pandemic took hold, according to the Canadian Federation of Nurses Union (CFNU). Data from Statistics Canada reveals that there were 126,000 vacancies in the health and social sector only in 2021.

The reason behind the influx of patients with respiratory illnesses stems from the removal of physical distancing measures that had been in place during most of the COVID-19 pandemic, Dong said. Lockdowns and restrictions on social gatherings largely prevented Canadians from gathering in large groups. As a result, they have gotten sick less often over the past two and a half years, Dong said.

“Now that we no longer have limitations … when we get sick, our immune system is not used to it, so it tends to be a worse disease,” Dong said. “If you have a cold today, it will feel much worse than any cold you’ll ever remember … because your body isn’t used to it.”

With beds in his emergency room either closed or already occupied by sick patients, there are times when there is no room to admit new patients from the waiting room, Dong said. As a result, doctors are also left waiting for patients. His shifts often start with waiting about an hour before a new patient can be assessed.

“Everyone is just waiting,” Dong wrote in an email to CTVNews.ca on Tuesday. “From a doctor’s perspective, it’s quite frustrating.”

It is not just hospitals that are experiencing an increase in patients with respiratory diseases in recent weeks – the individual clinics are also feeling the strain. Dr. Marina Abdel Malak, a family doctor based in Mississauga, Ont., said she has been working longer hours to accommodate the increased number of patients she is seeing, even though she has taken her work home.

“I’m reviewing the results and have to look over my schedule and try to open up more appointment slots,” she told CTVNews.ca in a phone interview Friday.

Abdel Malak works in two clinics, one of which is specifically for cough and flu patients with symptoms such as fever, cough, runny nose and nasal congestion. Two months ago, the clinic saw about 20 patients with these kinds of symptoms every day. Now the doctors see between 40 and 50 patients a day.

“We’ve definitely doubled our volume in the last two months,” she said. “The amount of coughs and runny noses and flus and rashes and fevers has increased significantly … It’s not unusual to see our lineup outside filling up even before our clinic opens.”

Operating above capacity has contributed to longer wait times for patients at both clinics, Abdel Malak said. Complaints from patients frustrated by having to wait for treatment take a toll on her and other clinic staff, she said.

“I completely understand that they’re frustrated because you have to take a significant chunk out of your day to see the doctor,” she said. “But at the same time, there’s no way I can handle 40 or 50 patients a day without someone having to wait.”

The Ontario government recently handed out a memo is asking family caregivers to work evenings and weekends to help ease the burden on pediatric hospitals. But at her clinic, Abdel Malak said she and her colleagues already don’t take breaks, nor are there set times for staff to eat lunch or use the restroom.

“What more can we give? We really give everything we can and we stay open as much as we can,” she said. “So many people forget that doctors are people too.”

With so much more viral activity being reported than usual this time of year and cold and flu season just beginning, Abdel Malak said she’s unsure what to expect over the next few months.

“It’s going to be an interesting winter, we don’t know how much longer our clinic can support this,” Abdel Malak said. “This is just the beginning.”

Going forward, Abdel Malak said she would like to see stronger public health measures in place across Ontario. This includes implementing mask mandates as well as encouraging residents to get vaccinated against COVID-19 and influenza. Other infectious disease experts are also urging Canadians to maintain good hand hygiene and use masks indoors.

“An ounce of prevention is worth a pound of cure,” Abdel Malak said.


With files from The Canadian Press and CTVNews.ca writers Tasha O’Neill and Michael Lee