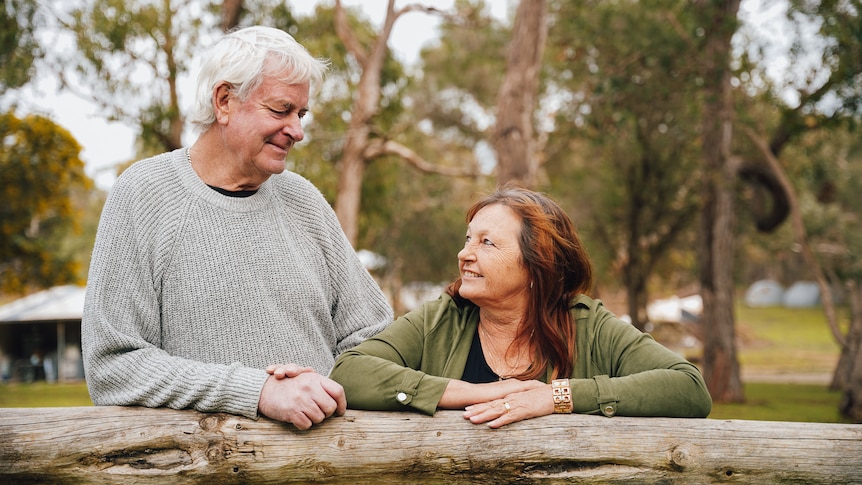 Carol Coleman had been dreaming for years when she stumbled across the dilapidated church campsite that is now the Joanna Life Skills Centre.

Her husband Rob was on his way through the small farming area in South Australia’s Coonawarra region to work when he saw it.

When Carol saw it, their Adelaide life as they knew it changed forever.

“I was hysterical. All I could see was people in a safe place, warm in bed and with food in their mouths. And that was just so important to me,” Ms Coleman said.

When they bought the site in 2017, its 12 buildings with 42 bedrooms had been empty for two years and in desperate need of repair.

“When you work in mental health and you see the terrible situations that people are in, you look at a place like this and think ‘this place can make a big difference’,” Ms Coleman said.

“So we packed up and here we are.”

Over the years, they have pushed for the renovation, so that the place has a good standard of living for the people with disabilities and mental needs who come to stay.

The NDIS registered service cares for 15 people at a time. Most visit for two weeks to “catch their breath”, while others have stayed 12 months.

While there, visitors help clean and care for the animals. They have the opportunity to learn life skills such as cooking and changing a tire.

“The whole idea is that they can look after themselves at the end of it all,” Mr Coleman said.

“While they’re vulnerable, they can be here. And when they’re a little more settled, they can go elsewhere and enjoy their lives.”

Vision for the site

Carol Coleman is not afraid of vulnerable people. Before studying to be a nurse, her mother’s trade, she worked as a cleaner at Glenside Psychiatric Hospital in Adelaide.

“Back in the 80s, people were looked after really well,” Ms Coleman said.

“It was once people started being moved out into the community that people really started to struggle.”

While some residents who walked into their homes received lifetime support, Coleman said others did not.

“I remember one particular lady was placed in a house across the road from me. She only used the living room and the toilet because she was too scared to go into the other rooms,” Ms Coleman said.

“She was a paranoid schizophrenic.

“She ended up walking out in front of cars because she was so upset.”

Ms Coleman does not know where she ended up.

“They’re the kind of people you just want to throw your arms around and go, ‘you can be safe here. You don’t have to be afraid anymore’,” Ms Coleman said.

“There are thousands of people in situations where it’s just horrible for them.

While the center may be Carol’s vision, Rob is just as involved.

His experience of handling waste transfer systems for 45 years has been put to good use.

“I think leading people in local government here is pretty much the same,” Coleman said.

Molly uses the center to catch her breath after a tough divorce.

During her month there, she has enjoyed coloring, playing puzzles, walking the living room and feeding Rosie the lamb.

“Being in Mount Gambier was so stressful, I was so stressed all the time. I just couldn’t handle it. But being here, I love it.”

Lately, she’s been busy preparing for her first prom later this month. The Colemans take her.

“They’re really nice and kind and caring to me.”

Required to help look after the grounds, Molly has taken to her new responsibility well.

“It’s all part of normal life. If they’re going to leave here and find their own place to live, they’ve got to be able to look after what they’ve got,” Mr Coleman said.

Five years in the making

Work on site continues. In five years, they have managed to renovate most of the home – adapting 42 small bedrooms to fewer but larger rooms with more living spaces and wet areas.

“It’s taken us a long time. Two people can only work so fast. And then you have to have the funds to buy materials,” Ms Coleman said.

“It’s been a tough battle, but it’s definitely worth it.”

They were able to finance the project early on by accommodating local meat workers.

“We were approached by Regional Development when we arrived,” Ms Coleman said.

“It was like a godsend because they basically gave us the opportunity to set up the place. We probably housed 140 workers over two years.”

The Colemans plan to keep adding amenities to the site — like a woodworking shed and community garden.

“The property is huge. We have to use it,” Ms Coleman said.

While clients can already access occupational, dietitian and physical therapist support at the center, the couple hopes for more services.

“In the future it needs to be a one-stop shop so people have got all the support around them that they need,” Ms Coleman said.

“These people are people, they have a whole lot of needs. And it takes an army to meet those needs.”

Having extra staff around is also essential to ease the couple’s burden.

They’ve only had one day off in five years, but it’s a price they’re willing to pay.

“This is our retirement,” Ms. Coleman said.

Coleman said people tended to stay in touch after they left the center.

“Carol often gets a couple of phone calls a day from previous people who have been here. And they’re just checking in, saying hello,” he said.

“Sometimes they might not feel so well. And a five-minute chat is enough to keep them on track.”

After the implications of renovations and COVID-19, the Colemans say they are ready to welcome more visitors.

“We’ve been under the radar for some time,” Ms Coleman said.

“For a place this big with so many options, people need to know we’re here.”

ABC South East SA will deliver a wrap of the week’s news, stories and pictures every Friday. Sign up to stay connected.