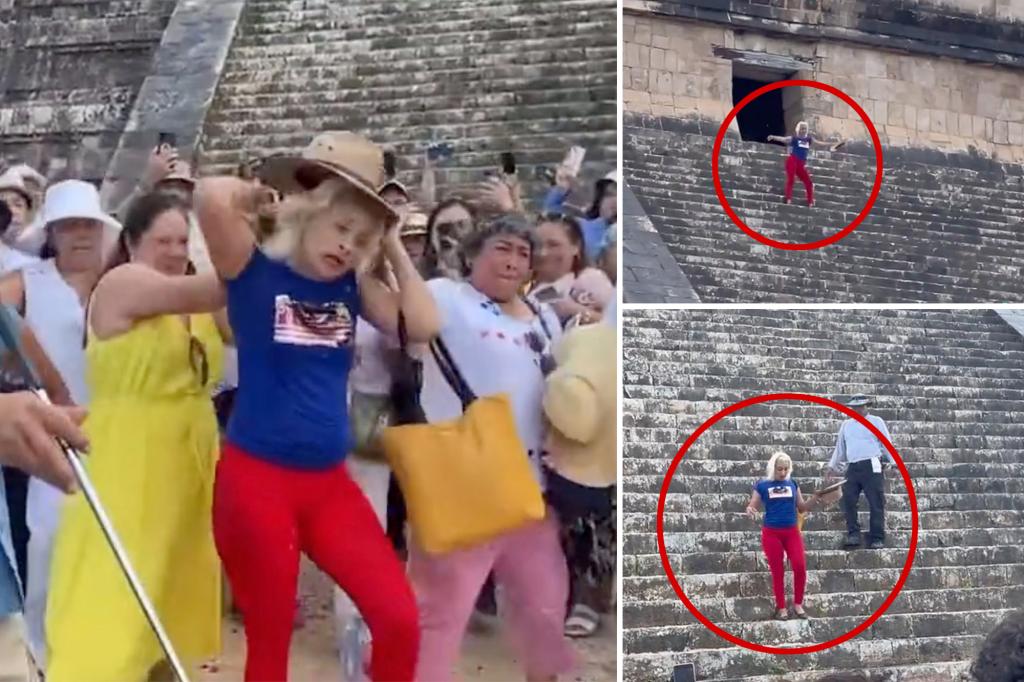 A renegade tourist who was met by an angry mob after climbing an ancient Mayan pyramid in Mexico’s Chichén Itzá this week has been identified as a 29-year-old Mexican national.

Officials said Abigail Villalobos had tried to pass herself off as Spanish after she was arrested for her viral stunt, but it has since been determined that she is actually from Mexico.

Villalobos was detained for about 30 minutes at the Tinum police station on Monday, fined the equivalent of $260 and then released, according to reports by the Mexican news outlet Golfo Pacifico.

Villalobos sparked outrage when she flouted rules barring visitors from climbing the 98-foot-tall Mayan temple at Kukulcán, which was named one of the New 7 Wonders of the World by UNESCO in 2007.

She was seen in TikTok videos dancing on the steps at the top of the pyramid and entering the temple before falling to the sound of loud jeers from a crowd of visitors.

Furious onlookers hurled abuse at the violator, calling her an “a-hole” and an “idiot” in Spanish and demanding she be jailed.

Some particularly offended witnesses went as far as splashing Villalobos with water, knocking her hat off her head and pulling her blonde locks as she was led away by officials from the Mexican Institute of Anthropology and History (INAH).

The Mayan Pyramid, a UNESCO World Heritage Site, has been off limits to visitors since 2008 for conservation purposes.

The National Institute of Anthropology and History said Monday that the temple, also known as El Castillo, has not been damaged.

Penalties set by Mexico’s Federal Law on Monuments and Archaeological, Artistic and Historic Areas for accessing the site without permission range anywhere from $2,500 to more than $5,000.

The Step Pyramid was built by the Mayan civilization sometime between the 8th and 12th centuries AD. to serve as a temple to the feathered serpent god Kukulcán.

In 2021, a woman from Tijuana, Mexico was fined for climbing the same pyramid while allegedly drunk.