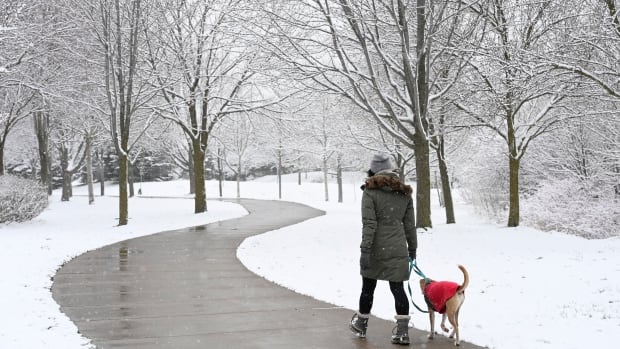 A popular park in downtown Toronto recently reopened after more than four years and nearly $5 million worth of construction — and along with all the new paths, benches and lighting, David A. Balfour Park also has a sleek new toilet building.

But it’s closed for the winter, and there’s only a porta-potty to stand in for it—a situation all too familiar to anyone who’s ever decided to take a walk in a Toronto park during the winter months.

“When we’re designing new parks, aiming for parks that meet people’s basic needs is really just the baseline for access,” Adri Stark, a senior manager at the charity Park People, told CBC Toronto in an interview.

“An inability to provide winter-ready restrooms is by no means unique to Toronto. But it contributes to accessibility barriers and limits park use, particularly for vulnerable communities such as older adults and people living with limited mobility.”

Of the 187 restroom facilities in Toronto’s parks, only 52 are equipped for winter use. An additional 47 restrooms are available at the city’s seasonal outdoor rinks. Two more winterized park restrooms are currently under construction, according to the city. And staff note that high-use parks are equipped with portable restrooms.

But that’s not enough for some residents. During the COVID-19 lockdowns, with more people outdoors, there were calls from Toronto citizens and city councilors to increase the number of year-round toilets and water fountains in city parks.

The City of Toronto says there was never a plan to winterize the new restroom building at David A. Balfour Park, located near St. Clair Avenue East and Mount Pleasant Road.

According to a statement from city staff, planning for the park’s upgrades, which began in 2015, “predated discussions around implementing more year-round restroom facilities.”

Resident ‘not disturbed’ bathroom is not winterized

Making it clear she’s only speaking for herself, Deborah Briggs, a downtown resident and president of the Summerhill Residents Association, says she’s surprised the new building isn’t winter-ready, but “not upset” .

“The park has little to no winter activities. The children’s playground is likely not used much in the winter, if at all, and there is no outdoor skating rink,” Briggs wrote in an email.

She notes that the park paths are not cleared of snow in winter either.

“That said, I can’t speak for all residents,” Briggs clarified.

But for Edith Wilson, a PhD candidate at the University of Guelph, public toilet access is a human rights issue.

Wilson has studied the issue specifically in Toronto and says the lack of a place to go to the bathroom is a barrier to participating in society.

“When people feel like there’s not enough access to the bathroom, they tend to stay at home and not really be as involved in the community,” Wilson said in an interview.

“Because again, nobody really wants to be put in that undignified position – like begging for access to a toilet in a business or … walking on the street or soiling themselves,” she added.

The improvements to David A. Balfour Park were part of the larger Rosehill Reservoir Rehabilitation project. The bulk of the project involved structural upgrades to the potable water reservoir buried beneath the park.

Construction began in 2018. The City of Toronto developed a plan for the park’s upgrades through the Rosehill Vision Committee. The cost of the park’s revitalization was $4.8 million.

City staff confirm that a portable restroom will be available at the park during the winter months.

In June, city council directed Toronto’s parks, forestry and recreation department to modernize park operations and improve services, including winterizing restrooms, though it’s not clear how the city will pay for it.

Among the desired improvements are more frequent and earlier mowing of grass on sports fields, increased waste collection, earlier activation of water fountains and winterization of public toilets.

Although no cost estimate was provided, a financial impact statement attached to the proposal notes is a “significant increase in service levels that will incur additional costs that cannot be accommodated within Parks, Forestry and Recreation’s existing budgets.”

Stark, of Park People, concedes that expanding access to winter restrooms will come with a price tag, and the way the city funds the parks department will have to change.

“We need to work towards ensuring that parks budgets truly keep pace with population growth in Toronto — as well as the high level of park use that we’ve seen since the start of the pandemic, which has been stable until now.”