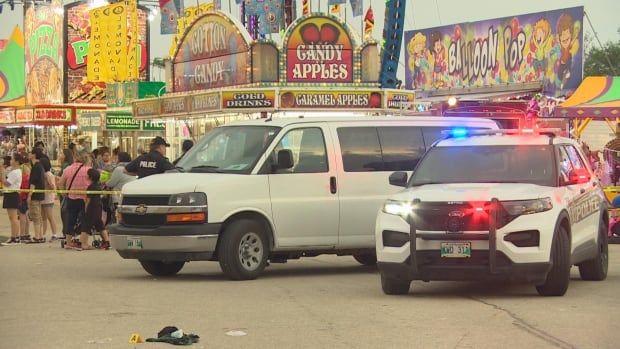 There was another victim in the shooting at Winnipeg’s big summer fair – an 11-year-old boy.

A 16-year-old boy was rushed to hospital in critical condition after being shot in Red River Exhibition Park around 7 p.m. Monday; his condition stabilized the next day, police said.

Investigators of major crimes on Tuesday found that there was another victim of gunfire – an 11-year-old boy who was a spectator was also hit by a bullet, police said in a press release on Thursday.

The boy, who did not know the others involved in the shooting, was with his mother when the bullet hit him in his lower body.

The boy’s mother rushed him from the chaotic shooting scene to a hospital, where he was treated for a gunshot wound and released. Police were later notified.

They are all in custody at present.

The three were found in a taxi in the Shaughnessy Heights area, near Tyndall Avenue and Burrows Avenue, just before 7:30 p.m. Monday. A loaded weapon was found with them, police said.

Fort Rouge and East Fort Garry Coun. Sherri Rollins said she has been afraid a spectator would be injured due to the scale of gun violence in the city this spring and summer.

“The last few weeks have been way too many shots,” said Rollins, who chairs the executive committee of protection.

“The violence we see, I hear from emergency rooms and more, that they were very afraid of this, so unfortunately it was something that had been foreseen, and therefore I have been really strong in calling for change.”

She wants to see more police officers step away from investigative duties to patrol the streets.